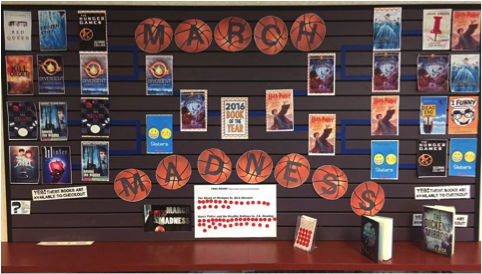 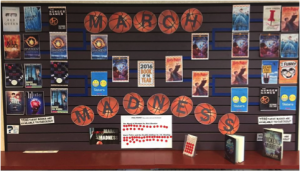 Teen patrons vote for their favorite novels in a March Madness-style bracket at the Sharon Forks Library.

What does it take to become the busiest library in the state? Just ask any staff member at the Sharon Forks Library and they will say that the honor of being the highest circulating library belongs to its patrons.
According to data from Georgia Public Library Service (GPLS), patrons of the Sharon Forks Library checked out 984,291 physical materials in fiscal year 2015. That’s nearly 300,000 more books, magazines, CDs, and DVDs than the second place library branch in the state for circulation.
“We were pleased, but not surprised, to find Sharon Forks at the top of the list,” says Sharon Forks Branch Manager Mendy Gunter. “These circulation figures demonstrate that our community finds library services relevant and valuable, and it further highlights the community’s need for additional shelving space and public meeting space that will come with the upcoming repurposing and expansion of the Sharon Forks Library.”
The Sharon Forks branch was not alone in receiving recognition for high circulation levels. Out of 405 library facilities in Georgia, all four FCPL branches were included in the top 50 rankings. The Post Road Library ranked 6th, the Cumming Library ranked 7th, and the Hampton Park Library ranked 49th.
“Our staff works diligently to make all our libraries welcoming for patrons, with both desirable programming and in-demand materials for pleasure reading and learning. When we see circulation statistics as high as these, it’s clear that our staff members are selecting and promoting materials that are interesting and relevant to the community. But, we could not offer new and current materials without the financial support of the Forsyth County Board of Commissioners,” says Forsyth County Public Library Director Anna Lyle. Lyle also credits Forsyth residents’ commitment to education, literacy, and life-long learning for the high use of the public libraries.
System-wide, FCPL had a per capita circulation rate of 11.33 in FY 2015, the highest rate in Georgia and nearly triple the state’s average per capita circulation of 3.64. FCPL also beats the most current national average per capita circulation of 8, according to the Institute of Museum and Library Services (IMLS).
“With careful planning and staff dedicated to serving the public, we were able to open both the Hampton Park and Post Road Libraries in the midst of a recession. All four of our branches returned to pre-recession operating hours on January 1, 2015 and our digital collection of eBooks, eAudiobooks, eMagazines, and eVideos grows each month,” explains Lyle. “Thanks to our funding partners at the local and state level, as well as organizations such as the FCPL Friends and Advocates, our library system remains strong.”
Looking ahead, Gunter encourages “members of our community to stop by Sharon Forks before June 30 and check out a couple of books to help us reach our next goal of circulating 1,000,000 items this year.”