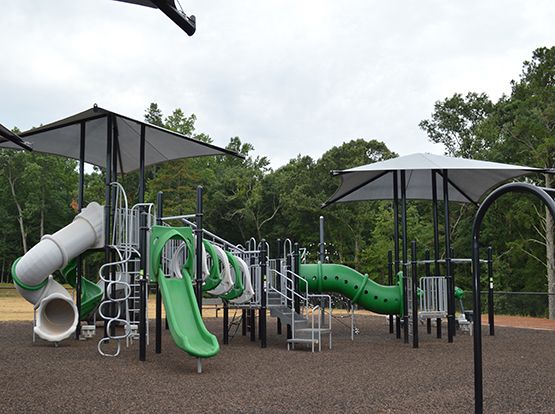 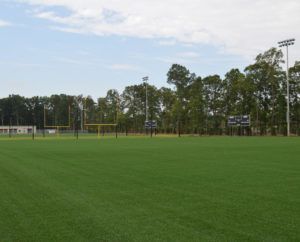 Project funded by Parks, Recreation and Green Space Bond and Impact Fees
Northwest Forsyth County is home to the county’s newest park, as Matt Community Park at Settingdown Creek was officially opened with a ribbon cutting ceremony on Friday, August 12. The new, approximately 180-acre park is located at 6555 Wallace Tatum Road.
Phase I of the park includes four synthetic-turf rectangular fields, a playground, concession and restroom buildings and a parks maintenance facility. It is anticipated that approximately one mile of natural-surface walking trails will be added at the park by spring 2017.
The property for the new park was acquired in December 2008 with funding from the Parks, Recreation and Green Space Bond approved by Forsyth County voters earlier that year. Construction of Phase I of the park, which began with a groundbreaking ceremony in July 2015, was funded by both the Parks, Recreation and Green Space Bond and by Impact Fees.
“We are sincerely grateful to our citizens of Forsyth County for making this great new park a reality, through their approval of the Parks, Recreation and Green Space Bond,” said County Commission Chairman R.J. (Pete) Amos. “I would also like to thank the development community for the Impact Fee funding that helped pay for construction of this new park.”
District 4 Commissioner and Vice Chairman Cindy Jones Mills, whose district includes the new park, shared her excitement about the project.
“We have come so far from the tiny single ballfield at the old Matt school that I played on as a child to this new park, with its athletic fields and state-of-the-art playground, and this is such an incredible addition to the Matt community,” Jones Mills said. “As someone who grew up here, I can tell you how great the need for park space in this part of the county has been and how much of an impact this new park will have on the community for generations to come.”
“In Forsyth County, we are extremely fortunate that our citizens value parks and recognize how important they are to our community,” continued Jones Mills. “This land was previously approved to be the site of 399 homes. By approving the Parks, Recreation and Green Space Bond in 2008, our citizens made purchasing this beautiful property – and preserving it as a park and as green space – possible.”
While Phase I of the park is the only portion currently open, future plans for the park include the possibility of adding tennis courts, an outdoor amphitheater, picnic pavilions, additional fields and trails. The timeline for any future development of the park will depend upon future availability of funding.
The master plan for the property also includes the potential location of a library and senior center on the site and approximately 125 acres of green space.
Approximately 185 acres of property was acquired by the county in 2008 to serve as Matt Community Park at Settingdown Creek. In 2011, the Forsyth County Board of Commissioners approved for the Fire Department to acquire three acres of the property to serve as the location of new Fire Station 3, with the purchase funds for those acres going back into the Parks, Recreation and Green Space Bond account. New Fire Station 3 opened in July 2013. The fire station and new park share an entrance off of Wallace Tatum Road.
To learn more about parks in Forsyth County, visit www.forsythco.com/parks.