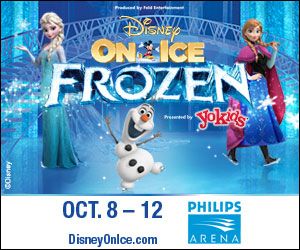 I remember watching FROZEN in theaters the first time – knowing then that “they HAD” to turn this into a Disney on Ice production. And yay!! Disney on Ice presents FROZEN at Phillips Arena! If you’ve never been to a Disney on Ice show, then I’ll just say that I’m constantly amazed – the skating, the costumes, the songs, the production – it’s all wonderful!! And I don’t see how the latest production, FROZEN, could be anything different.
Below are some details about this specific show. . . (and a chance for you to save some money)

Enter a fantastical winter wonderland beyond all imagination at Disney On Ice presents Frozen! The heartwarming, Academy Award ® -winning tale you love is now LIVE and skating into your town. You’ll be magically whisked away into the wintery world of Arendelle, where you will be dazzled by amazing special effects and astonishing skating. Sing and dance along to inspiring songs, including “Let It Go.” Join royal sisters Elsa and Anna, the hilarious snowman Olaf, Kristoff, his loyal reindeer Sven and the mystical trolls as they journey to discover that true love is ultimately the most magical power of all!
Hosted by Mickey Mouse and Minnie Mouse, with special guest appearances by your most beloved Disney Princesses and characters from favorites like Disney•Pixar’s Toy Story, Finding Nemo and Disney’s The Lion King, don’t miss this unforgettable celebration of love and friendship. Tickets are on sale now.

Event Details:
There are over twelve performances scheduled at Phillips Arena between opening night, Wednesday October 8th and Sunday, October 12th. Several of those were added after tickets went on sale because they were selling so fast. And now there’s even better news too. Beginning at 10am this Friday, September 12th, additional lower level seats will open for purchase. 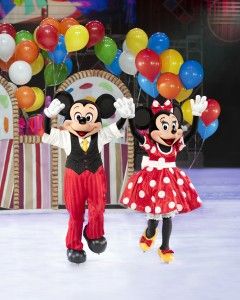