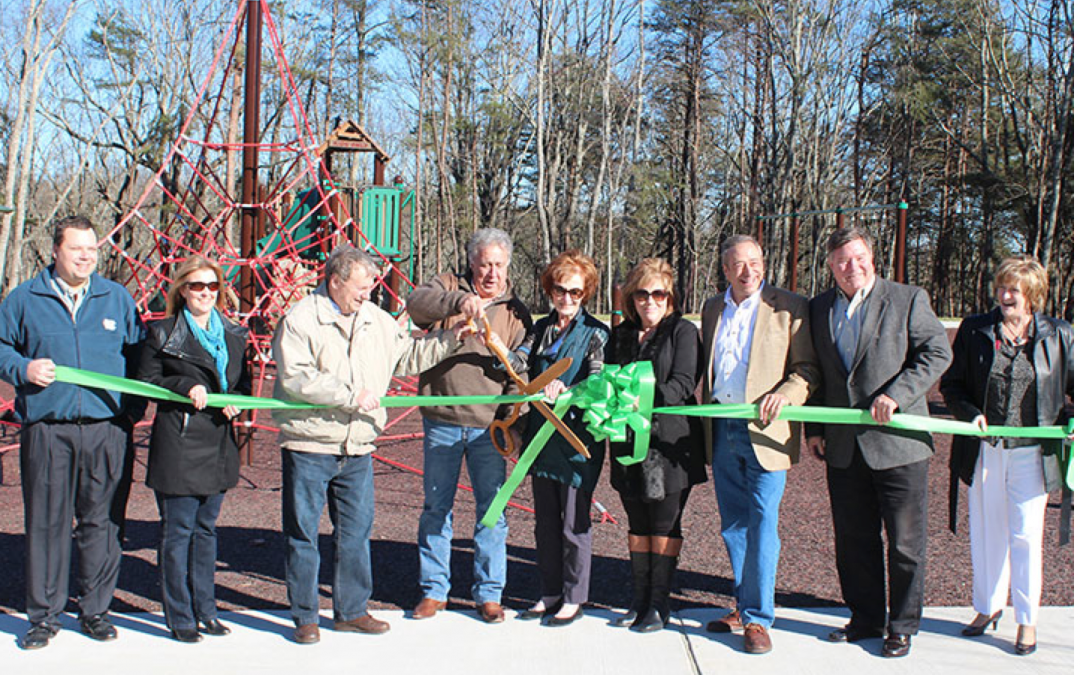 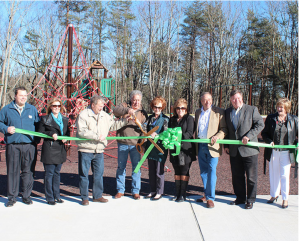 New phase features more than six miles of trails
The newest phase of Forsyth County’s Sawnee Mountain Preserve opened Friday, January 29, with a ribbon cutting ceremony to officially welcome the newest amenity in the county’s award-winning parks system.
Sawnee Mountain Preserve Phase III is located north of downtown Cumming at 2505 Bettis Tribble Gap Road. Funded by the Parks, Recreation and Green Space Bond approved by voters in 2008 and by the Special Purpose Local Option Sales Tax (SPLOST) VI program, Sawnee Mountain Preserve Phase III features more than six miles of hiking trails, two picnic pavilions, a playground with a rubberized surface, restrooms and additional parking.
District 1 Commissioner and Commission Chairman R.J. (Pete) Amos, in whose district Sawnee Mountain Preserve is located, thanked citizens for making the new phase of the park possible by their approval of the Parks, Recreation and Green Space Bond and the SPLOST sales tax program.
“I am so proud that we have been able to preserve this beautiful land and open it as a recreational amenity for the public to enjoy, and we could not have done so if it were not for the support of our citizens,” said Amos. “I would also like to thank the Dr. Dunn family for their assistance in making this phase possible.”
One of the individuals instrumental in making the Sawnee Mountain Preserve a reality – Mary Helen McGruder – noted the importance of the project.
“The completion of the third phase of the trail system is a continuation of the partnership started years ago between Forsyth County and Sawnee Mountain Foundation,” stated Sawnee Mountain Foundation President Mary Helen McGruder. “We are pleased that today our citizens can enjoy the mountain from literally one end to the other. We would particularly like to thank Natural Resources Division Manager Matt Pate for his dedication to this effort and for his work on the mountain.”
About Sawnee Mountain Preserve
The creation of Sawnee Mountain Preserve established protection of 963 acres of green space. Sawnee Mountain Preserve is Forsyth County’s largest passive park and was made possible through a collaborative effort of individuals, organizations and government. It first opened to the public as a county park in 2005, making more than three miles of trails accessible for walkers, runners and hikers, along with an amphitheater and playground. Phase II of the park, which features a 5,600-square-foot visitor center and access to Sawnee Mountain’s trails, opened in 2008.
Sawnee Mountain Preserve offers a number of amenities for the public to enjoy. A hike up to the Indian Seats – a natural rock formation at the top of the trail system – offers a beautiful setting for enjoying the views of the north Georgia mountains. The Sawnee Mountain Preserve Visitor Center features interactive exhibits on the natural and cultural histories of Sawnee Mountain and a resource library/lounge where visitors can relax and read. A wide variety of programs are also available at Sawnee Mountain Preserve including instruction on rock climbing and tree climbing, and educational programming focused on nature awareness and environmental science.
Sawnee Mountain Preserve has received a number of accolades over the years. The Georgia Urban Forestry Council has recognized the park twice – first in 2005 with the “Most Outstanding Green Space Plan” award and again in 2008 when the Sawnee Mountain Preserve Visitor Center earned the “Outstanding New Development” award. In 2009, the project earned Forsyth County a Georgia County Excellence Award, presented by the Association County Commissioners of Georgia and Georgia Trend magazine.
Park Hours:
November through February – 6 a.m. to 7 p.m.
March through October – 6 a.m. to 9:30 p.m.
Visitor Center Hours:
Monday through Saturday – 8:30 a.m. to 5 p.m.
To learn more about Forsyth County parks, visit www.forsythco.com/parks.