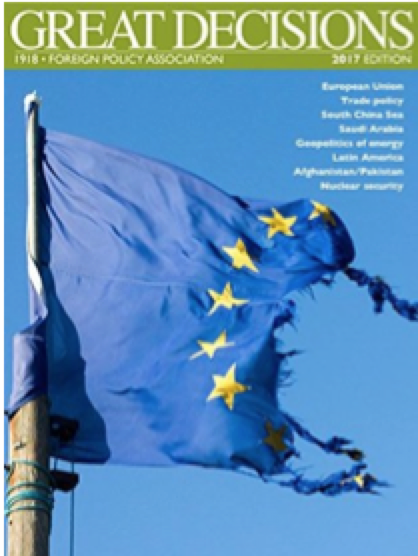 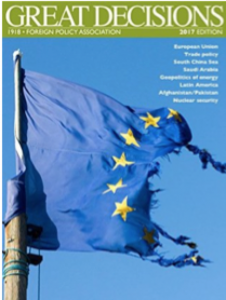 Professors from the University of North Georgia (UNG) will lead a series of eight discussions on complex global issues at the Cumming Library. The series is part of Great Decisions 2017, a national program presented by the Foreign Policy Association to help local communities better understand global politics, government, and foreign issues that affect the United States.
Each session will be held on Thursday evenings in February and March (no meeting March 16) at 7:00 p.m. at the Cumming Library, 585 Dahlonega Street. Admission is free, but advance registration is requested at www.forsythpl.org, or by calling 770-781-9840.
The first event of the Great Decisions series will focus on the European Union (EU) and the impact of the United Kingdom’s vote to exit the EU. Dr. Craig Greathouse, Associate Department Head and Professor, Department of Political Science & International Affairs at UNG, will address Europe’s refugee crisis, lingering financial recession, and the constant threat of terrorism in “The Future of Europe” on Thursday, February 2.
The U.S. political mood toward trade has gone sour, as evidenced by President Trump’s recent action to withdraw from the Trans-Pacific Partnership. Dr. Michael Gove, Assistant Professor of Economics in the Mike Cottrell College of Business will lead a discussion on the metrics used to gauge economic strength and how the U.S. can develop appropriate policy solutions in “Trade and Politics” on Thursday, February 9.
In “Conflict in the South China Sea,” Dr. Christopher Jespersen, Dean of UNG’s College of Arts & Letters, will dissect the competing territorial claims in the South China Sea, explain China’s increasing naval presence, and outline the careful diplomacy required to keep tensions from boiling over. This discussion will be held on Thursday, February 16.
Many American policymakers say that Saudi Arabia’s promotion of Wahhabism, an extremely conservative version of Islam, creates jihadists. They also point to the country’s lack of democracy, women’s rights, and human rights as a source of instability. Dr. Victoria Hightower, Associate Professor in UNG’s Department of History, Anthropology & Philosophy, will address these topics and Deputy Crown Prince Mohammad bin Salman’s attempts to shift political power to a younger generation in “Saudi Arabia in Transition,” on Thursday, February 23.
Topics for discussion in March include U.S. Foreign Policy and Petroleum, Latin America’s Political Pendulum, Prospects for Afghanistan and Pakistan, and Nuclear Security.
While advance knowledge of these topics is not required to participate in the Great Decisions series, the Foreign Policy Association published a Great Decisions 2017 Briefing Book that can be purchased online or borrowed from the Forsyth County Public Library’s collection. A Great Decisions 2017 DVD is also available online and at the library and includes eight 30-minute documentaries.
For more information, or to register to attend a Great Decisions discussion, please visit www.forsythpl.org.