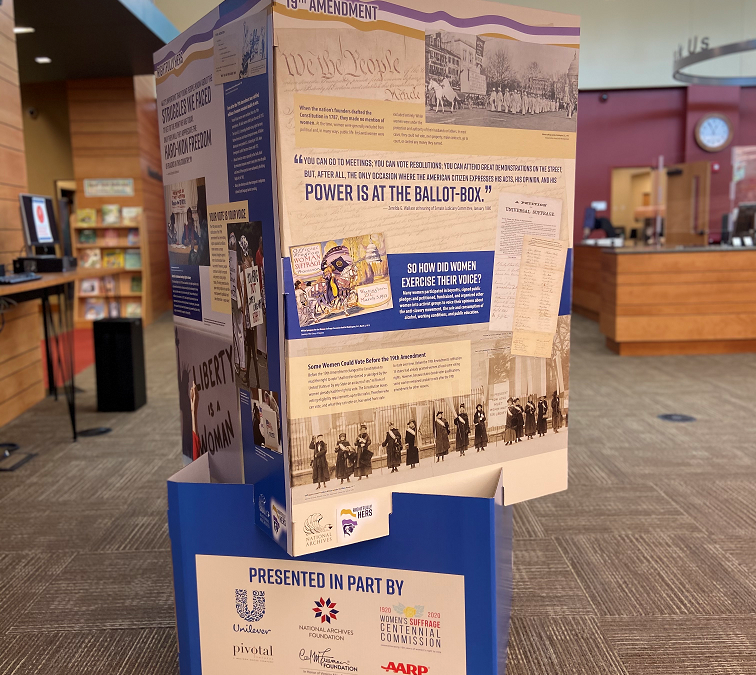 Forsyth County Public Library unveiled a new pop-up exhibition from the National Archives this week at the Post Road Library.

Rightfully Hers commemorates the 100th anniversary of the ratification of the 19th Amendment and contains simple messages exploring the history of the ratification of the 19th amendment, women’s voting rights before and after the 19th, and its impact today. Despite decades of marches, petitions, and public debate to enshrine a woman’s right to vote in the constitution, the 19th Amendment – while an enormous milestone – did not grant voting rights for all. The challenges of its passage reverberate to the ongoing fight for gender equity today.

“The ratification of the 19th Amendment was a landmark moment in American history that dramatically changed the electorate, and although it enshrined in the U.S. Constitution fuller citizenship for women many remained unable to vote,” explains Jennifer N. Johnson, co-curator of the exhibition.

Rightfully Hers is organized by the National Archives and Records Administration. The exhibition is presented in part by the Women’s Suffrage Centennial Commission and the National Archives Foundation through the generous support of Unilever, Pivotal Ventures, Carl M. Freeman Foundation in honor of Virginia Allen Freeman, AARP, and Denise Gwyn Ferguson.

“This is a milestone in our nation’s history and the library is honored to participate with other libraries, museums, and civic organizations across the country in the display of popup exhibits like Rightfully Hers,” says Programming Manager Tracy Walker.

While the library isn’t hosting in-person programming due to the ongoing pandemic, a virtual guest lecture event entitled ” Celebrating the Centennial of the 19th Amendment” is planned for Tuesday, August 18 at 7:00 p.m.

“Jessica VanLanduyt from the Atlanta History Center will lead a webinar exploring the decades-long struggle for women’s suffrage, how women gained the vote, and the ways they have used political power over the last century,” adds Walker.

Participation in the webinar event is free and a library card is not required. To join the webinar, please register in advance.

For more information about Rightfully Hers or ” Celebrating the Centennial of the 19th Amendment,” please visit the Forsyth County Public Library’s website at www.forsythpl.org.