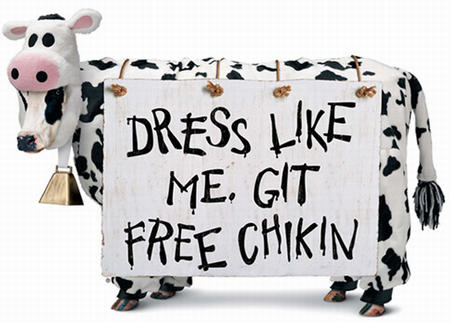 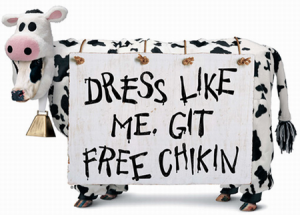 Cow Appreciation Day is coming up in Georgia! And it’s the 14th annual celebration. On Tuesday, July 10, 2018 from opening at 6am until 7pm you can dress as a cow and receive a reward!
This year Chick-fil-A has simplified the reward. In order to make the award more consistent for all and provide the highest guest experience, anyone wearing anything cowlike will receive a free entrée!

“Adult customers who dress in any type of cow attire, whether it’s “head-to-hoof” or sporting a cow-spotted accessory, will be rewarded with a free Chick-fil-A entrée, such as an Original Chicken Sandwich, seasonal Smokehouse BBQ Bacon Sandwich or breakfast favorite, the Egg White Grill. Children will receive a free Kid’s Meal for dressing in a cow costume. Salads will not be redeemable during Cow Appreciation Day this year. (A full list of redeemable menu items can be found here.)”

Click here for more information
And a few reminders for you:
∙ Wear anything cow-like and receive your free entrée from opening until 7pm.
∙ Breakfast items may not be served at all locations.
∙ Salads are excluded from this offer.
∙ To participate, orders must be placed at the register.
∙ One free breakfast, lunch or dinner entrée per person for anyone dressed cow-like.
∙ Don’t forget to share your best photos and why you love the Cows using #CowAppreciationDay 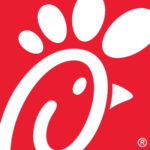 Atlanta-based Chick-fil-A, Inc. is a family owned and privately held restaurant company founded in 1967 by S. Truett Cathy. Devoted to serving the local communities in which its franchised restaurants operate, and known for its original chicken sandwich, Chick-fil-A serves freshly prepared food in more than 2,100 restaurants in 46 states and Washington, D.C. Chick-fil-A system sales reached nearly $8 billion in 2016, which marks 49 consecutive years of sales growth. In 2016, Chick-fil-A was named the Technomic Consumer’s Choice for “providing value through service” and QSR Magazine named the company “the most polite restaurant in the country” in its annual drive-thru report. Chick-fil-A was also recognized in 2015 as America’s “Top Chicken Restaurant Brand” by The Harris Poll and the only restaurant brand named to the Top 10 “Best Companies to Work For” by 24/7 Wall Street. in 2016. More information on Chick-fil-A is available at www.chick-fil-a.com.